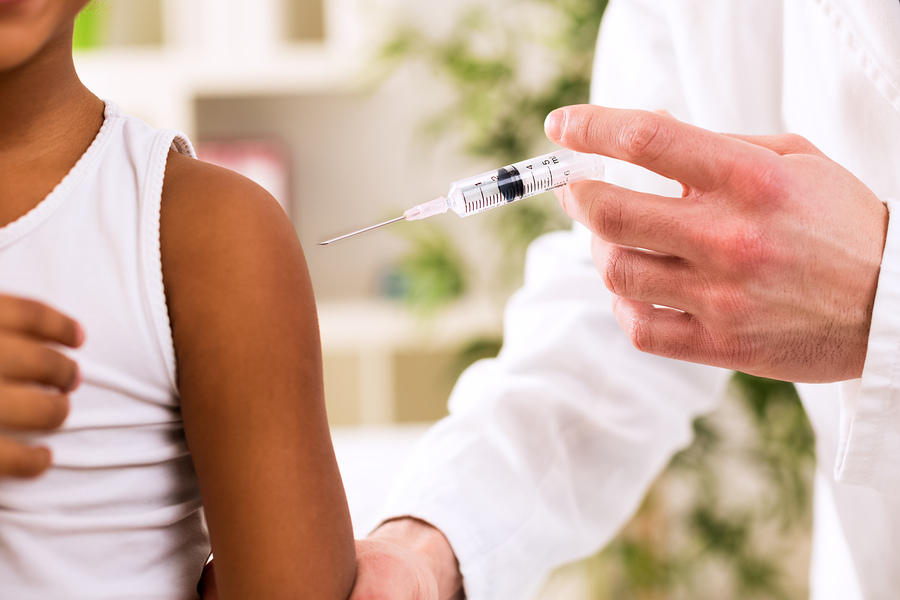 I’ve kept the original blog post below for your information, but wanted to make sure everyone as the update to make a truly informed decision. And please, instead of heading into the flu season with fear, arm yourself with the  knowledge of how to use pediatrician-approved natural remedies to beat your child’s flu! Start with reading my 2 blogposts on Top Ways to Boost Your Child’s Immune System and Pediatrician-Approved Natural Remedies for the Flu.

And stay tuned for my online course, Everyday Holistic Pediatrics coming out any day now! I’m SO excited to teach you PRACTICAL and EASY pediatrician-approved ways to use homeopathy, herbs, acupressure points, essential oils and diet to help your child get through the cold/flu season naturally and so much more (colds, fever, cough, stomach flu, earache, sore throat, first aid and more!). Be sure to sign up for my newsletter to be notified as soon as it’s available!

To get the flu vaccine or not? That is the question…

Or at least, it’s a very common question in my office this time of year.

I believe that the decision to get the flu vaccine for your child, just like any other vaccine, is YOUR CHOICE as a parent, and it’s a very personal choice with many factors that have to be weighed. This decision must be made on an individual basis, taking into account the unique healthcare needs and concerns of your child.

**PLEASE NOTE: I update my post on the flu vaccine yearly to reflect the current flu season. This post is for the 2017-2018 winter flu season.**

What exactly is the flu?

Before we dive into the flu vaccine, let’s take a look at the flu itself.

Symptoms of the flu can range anywhere from mild cold-like symptoms, to high fevers, chills, fatigue, sore throat, runny nose and cough, headache, body aches, and vomiting/diarrhea. However, it’s important to note that less than half of those infected with the influenza virus will actually develop flu symptoms, and most people will have a relatively mild illness. While there are certainly people who get very sick and have complications from influenza infection, the vast majority will not have an illness anywhere severe enough to even consider hospitalization. Most people who get the flu will recover within days to 2 weeks without any complications.

Patients who are more likely to have serious complications from the flu and be hospitalized are young children less than 2 years of age and adults who have associated risks, which include being over 65 years old, pregnancy, asthma, chronic lung or heart disease, diabetes, immunosuppression due to disease or medication, morbid obesity, and neurologic or neurodevelopmental disorders.

How “bad” will this year’s flu season be?

Researchers at the University of Chicago have developed a predictive model to try to forecast just how bad each flu season will be. Using this model, their prediction for a rough 2016-2017 flu season was accurate. They’ve used this same model to try to predict what our current flu season will bring. When asked what the 2017-2018 flu season has in store, senior researcher, Mercedes Pascual, PhD notes, “That’s the million-dollar question. Our analysis for this year showed that the virus is already changing in a significant way. We predict an outbreak that is above average but moderate, not severe, because last year was such a bad season.”

How effective is the flu vaccine?

According to the CDC’s vaccine effectiveness studies that have been performed yearly since the 2004-2005 flu seasons, the flu vaccine’s overall effectiveness has ranged from 10% in 2004-2005 to 60% in 2010-2011. This number varies quite a bit for different populations. The flu vaccine will only be effective if those people receiving the vaccine mount an appropriate immune response. While 97% of adults ages 18-64 years given the vaccine may show protective levels of antibody titers at 21 days after vaccination, the same isn’t necessarily true for children. At 10 days, the antibody response to the flu vaccine in kids under 9 years of age is found to be much lower. The low response in children under 9 years of age accounts for the recommendation that children 6 mos – 9 years who are receiving their first flu vaccine receive 2 doses of the flu vaccine approximately 1 month apart.

When we look at the data that’s actually out there, the numbers don’t seem encouraging. The Cochrane Library provides a database of systematic reviews of the scientific literature on a specific question, like – “Is the flu vaccine effective in preventing influenza in healthy adults?” A Cochrane review of 50 studies looking at this very question found that “in the relatively uncommon circumstance of vaccine matching the viral circulating strain and high circulation [italics added], 4% of unvaccinated people versus 1% of vaccinated people developed influenza symptoms.” The authors conclude that “influenza vaccines have a modest effect in reducing influenza symptoms and working days lost. There is no evidence that they affect complications, such as pneumonia, or transmission.” On the other hand, the flu vaccine was noted to cause “an estimated 1.6 additional cases of Guillain-Barre Syndrome per million vaccinations,” although “the harms evidence base is limited and the authors make the WARNING that “industry [READ: vaccine manufacturers] funded studies were published in more prestigious journals and cited more than other studies… The review showed that reliable evidence on influenza vaccine is thin but there is evidence of widespread manipulation of conclusions and spurious notoriety of the studies. The content and conclusions of this review should be interpreted in light of this finding.”

Another interesting study to note is a Canadian study that found patients who had received the flu vaccine in the 2008-2009 flu season had a higher risk of needing medical care for illness from the pandemic H1N1 flu during the 2009-2010 flu season. The editor cautions that this observational study doesn’t prove that there is a direct link between getting the flu vaccine and having a higher risk of contracting the flu the following year and is therefore not conclusive, but does note that “if the findings in the current study are real, however, they raise important questions about… the best way to prevent and control both types of influenza [seasonal and pandemic] in future.”

So where does that leave us? From what I can tell, if you choose to get the flu vaccine, AND it’s a good match for circulating influenza virus strains, then you may have a 3% chance of preventing the flu but not its complications, and a very small chance of developing an autoimmune complication (Guillain-Barre), and perhaps a small chance of having a higher risk of contracting a pandemic flu the following year. Hmmm…

Is this year’s flu vaccine a good match?

Unfortunately, or fortunately, as of the week ending October 28,2017, influenza activity remained low throughout the United States so it’s too early yet to tell. But here are some of the facts we know so far:

The Influenza strains in this year’s flu vaccine are:

Of the respiratory specimens that have been tested as of October 28, 2017:

What do all of these statistics mean?

Even though there is very little flu across the country, it does appear that this year’s flu vaccine is likely a good match to what will be the circulating influenza strains this winter.

So, should you or your child get the flu vaccine?

This is a tough question to answer, and a decision that only you can decide for yourself or your child. I typically recommend that patients with lung/heart disease or other serious chronic illness receive the vaccination. Apart from that, the decision really needs to be made on an individual basis. The flu vaccine is contraindicated for patients who have had life-threatening reactions after previous flu vaccines. Precautions should be taken in those with severe egg allergy. And I would exercise extreme caution in patients who have experienced Guillain-Barre syndrome after previous influenza vaccination or have a family member who has, and in patients who have a strong family history of other autoimmune or neurodegenerative illnesses.

The decision to get the vaccine depends on what risks you, as patients and parents, are willing to take. While influenza infection tends to produce mild illness in most, it certainly can cause more serious and even life-threatening complications, especially for those populations considered at risk. I have cared for children hospitalized in the Pediatric Intensive Care Unit from influenza complications. On the other hand, no vaccine is 100% risk-free. I have also cared for patients who have developed serious complications after the flu vaccine, including multiple sclerosis and Guillain-Barre.

Children who are most at risk for serious adverse vaccine reactions are those who have underlying “mitochondrial dysfunction”. These kids often have a personal history of delayed developmental milestones or family history of autoimmune illness, neuropsychiatric disorders like autism or ADHD, cancers, or other chronic illness. For these kids, vaccination is not necessarily out of the question. But serious adverse reactions can be mitigated by supporting mitochondria, methylation, and detoxification with supplements like coQ10, methyl-B12, glutathione, and homeopathic Thuja. I also don’t recommend getting shots when kids have even a hint of a cold or illness coming on – if we’re asking our child’s immune system to mount an appropriate and effective response to the flu vaccine, or any other vaccine for that matter, why have their immune systems occupied with anything else?

So here’s what we know:

There is NO right or wrong decision. By informing yourself, you are doing the best thing for your child and for your whole family. Trust your mama or your papa “gut”, and you will always do what is best for your child. Whatever you decide, using your natural medicines toolkit will get your whole family through the winter cold and flu season healthier and stronger, so be sure to read my blog post Top Ways to Boost Your Child’s Immune System.

I do hope that this has helped you in making this difficult decision for your child. Be sure you’re signed up for my Healthy Kids Happy Kids newsletter (www.healthykidshappykids.com) to get my next blog post where I teach you how to treat your child’s flu naturally – using homeopathy, herbs, essential oils and acupressure!

And please share this article with any mama or papa you know who wants to keep their children healthy through the cold and flu season naturally!